We “Pokkapoka runners" are supporting to participate marathon by matching escort runners with various disabled runners. 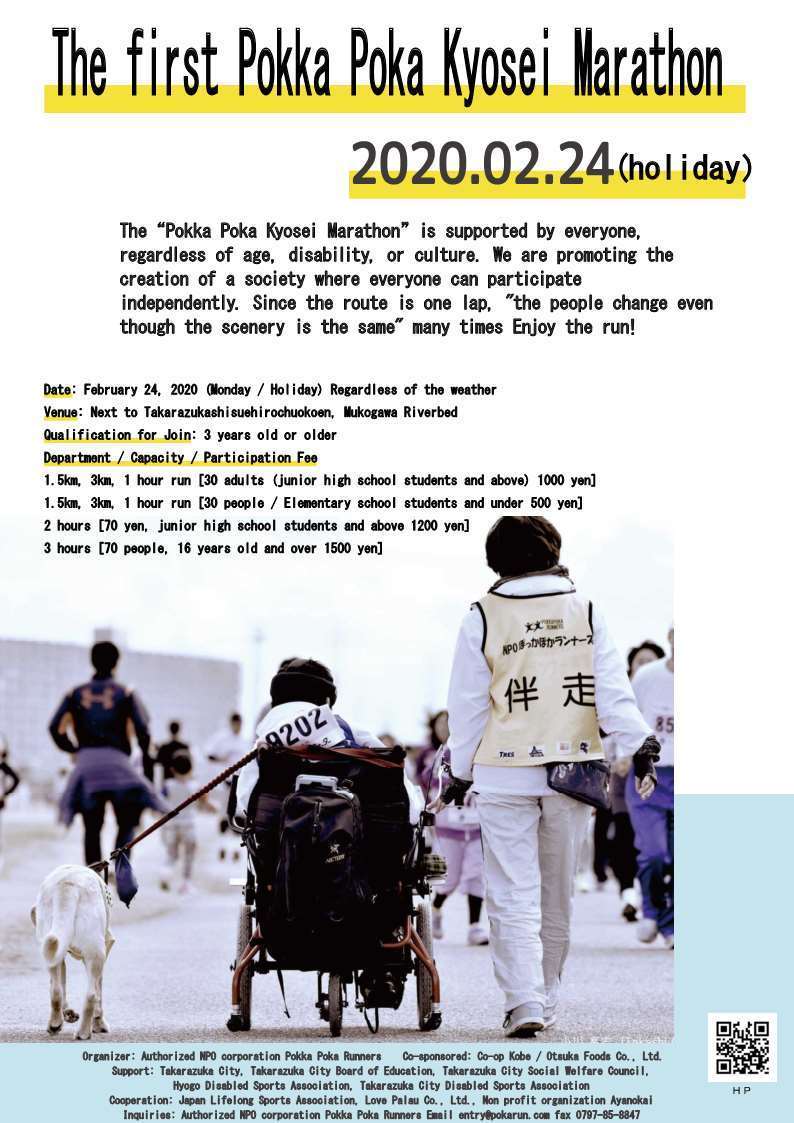 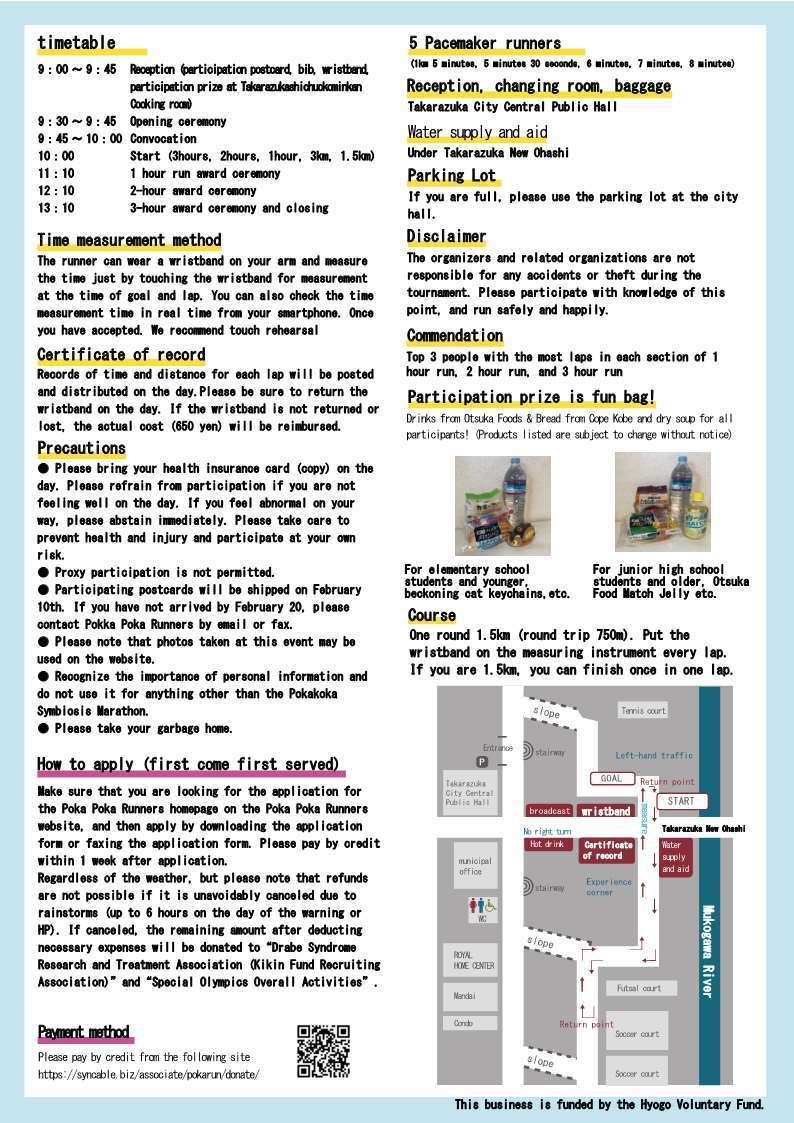 Please pay by credit from the following site,within 1 week after application. 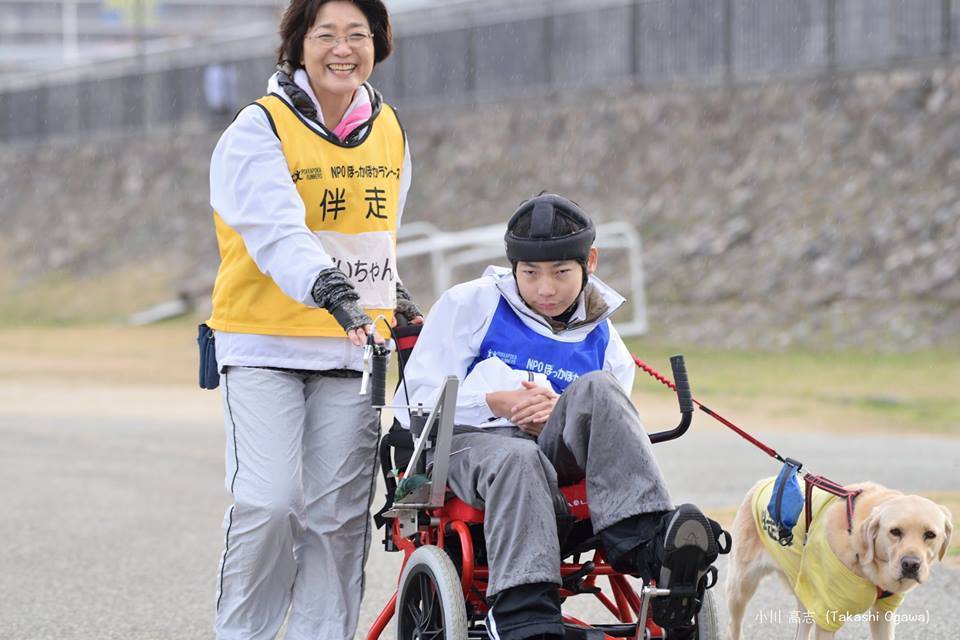 We are supporting to participate marathon by matching escort runners with various disabled runners. Especially, we are providing footpeg wheelchair to people who have the handicap in physically, and they feel "the wind" by their own feet.
Footpeg wheelchair is wheelchair which has a pedal, and it is moving forward by pushing the pedal. If you can move either right foot or left foot any bit, you can move it. Many people are impressed that "my feet are moving!"
For people those who with intellectual disabilities, our program is a place to know "rules of society" and as a part of supporting independence by participating social activities. 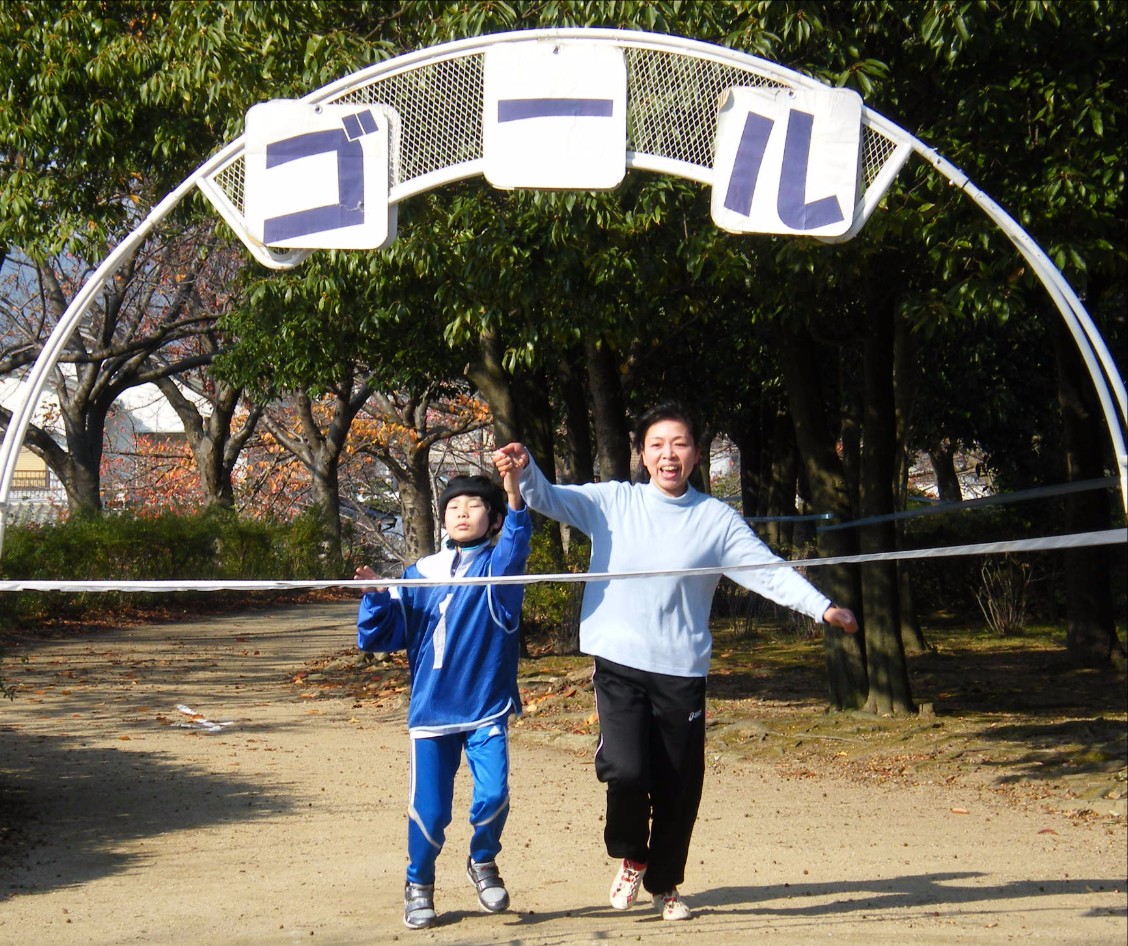 How we started
My son, Kiyonori (Kiyokun) has been suffering from Dravet Syndrome. He has experienced his first outbreak of convulsion. After that, he has frequent fit for 2 to 3 hours just by seeing sunshine filtering through foliage or stripe patterns. This happens 5-6 times in a hour when he has a fever. We also have had number of respiratory arrests. When he was 4 years old, he experienced encephalopathy and his ability went back to the one for a baby. He has started everything from sitting by himself, however, he has survived and he is now a young-adult of 24 years old.
When Kiyonori started to attend 1st grade (2004), we have set up a “Kiyokun Fund” (Association for research on Dravet Sundrome). We have organized a series of events, such as charity concerts, recitations, musicals to enlighten the issues around epilepsy. These programs are also for fundraising for medical research on the syndrome. The 2nd charity concert was held in Carifornia and was covered by media such as West Country Times ofr Nichibei Times.
Kiyonori entered to a high school for handicapped and started to run marathon. He join in the marathon competition in the school for short-track (1.5km) and won the first prize, on the contrary to our wish to complete the race even by walking. We were so delighted to see his proudly smiling face to know he found something he can bright up himself even with severe handicap.
In 2012, when he was 17 years old, we understood that he need to live with wheelchair when he got adult. The reason is unclear but we know this is due to longer longevity of the people with Drevet Syndrome which used to live shorter life.
In the process of participating in marathon races, we have realized that there are few handicapped marathon runners. It is more known about accompanying runner for the people with visual disturbance, however, the other types of accompanying runner, such as for intellectually or physically handicapped are not well known.
This is how we have started “Pokkapoka Runners” which match all the handicapped runners with accompanying runners so that all the people with different handicap can participate in various marathon races.
Yuko Arimori, an Olympic athlete, Nami Takeuchi, the president of Prop Station, Kanpei Hazama and other people have joined us to start “Pokkapoka Runners” on 1st Oct of 2013 and we have become certified non-profit in September 2016. We have been aiming at increased welfare and social participation of handicapped as well as improved health and independence.

We are practicing Takarazuka and Osaka, and attending 6~10 competition per year.Also, we are organizing events such as Christmas lunch, BBQ, and making Udon events to make the exchange with escort runners, volunteers, disabled runners, and families. There are various disabled participants, who are 3 to 82 years old, but we are working hard toward the goal together with everyone's hearts. Through operating "Pokkapoka workshops" to understand various handicaps in 3 times per year, it benefits to raise escort runners and local community contribution.
There is regularly donation which you can decide the amount of monthly or annual donation through automatic transfer, and one-time donation which you can decide the donation amount as well.
Donate by credit card

Donations will be used carefully as a cost related to the following expenses. 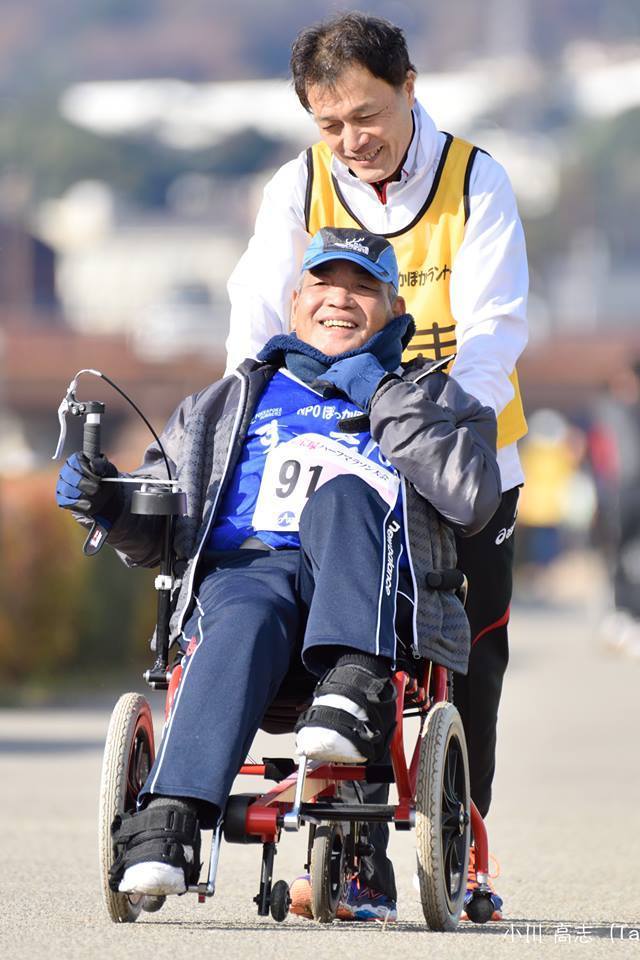 Purchasing expanses for "Footpeg wheelchair" (280,000~580, 000including optional) which disabled runners can use.
We would like to them use it every day, so they take home in the rotation. 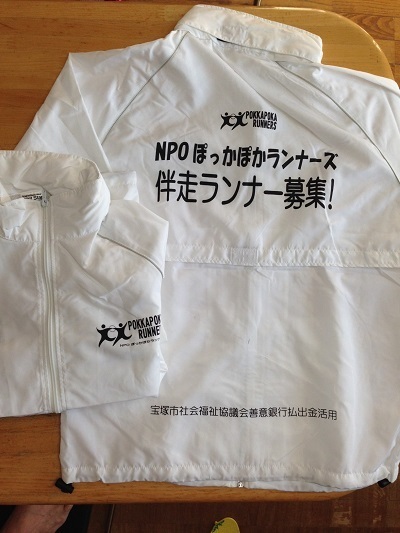 Purchasing expanses for windbreaker(6,000yen)wearing at marathon competition. It makes easier to find participant within many people. 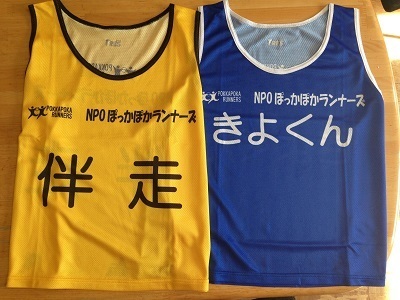 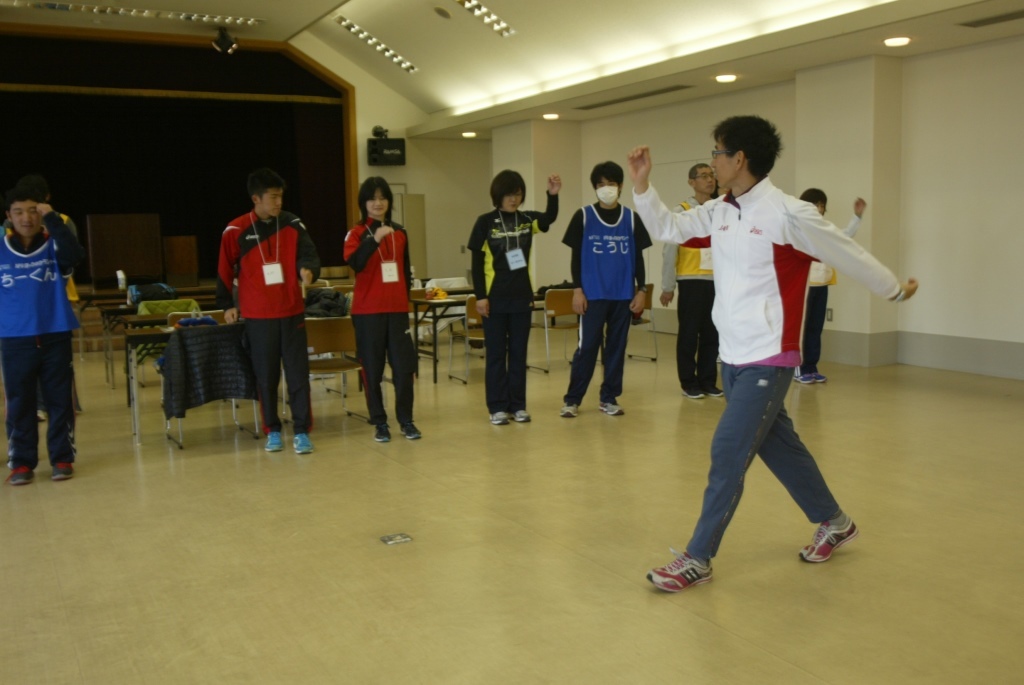 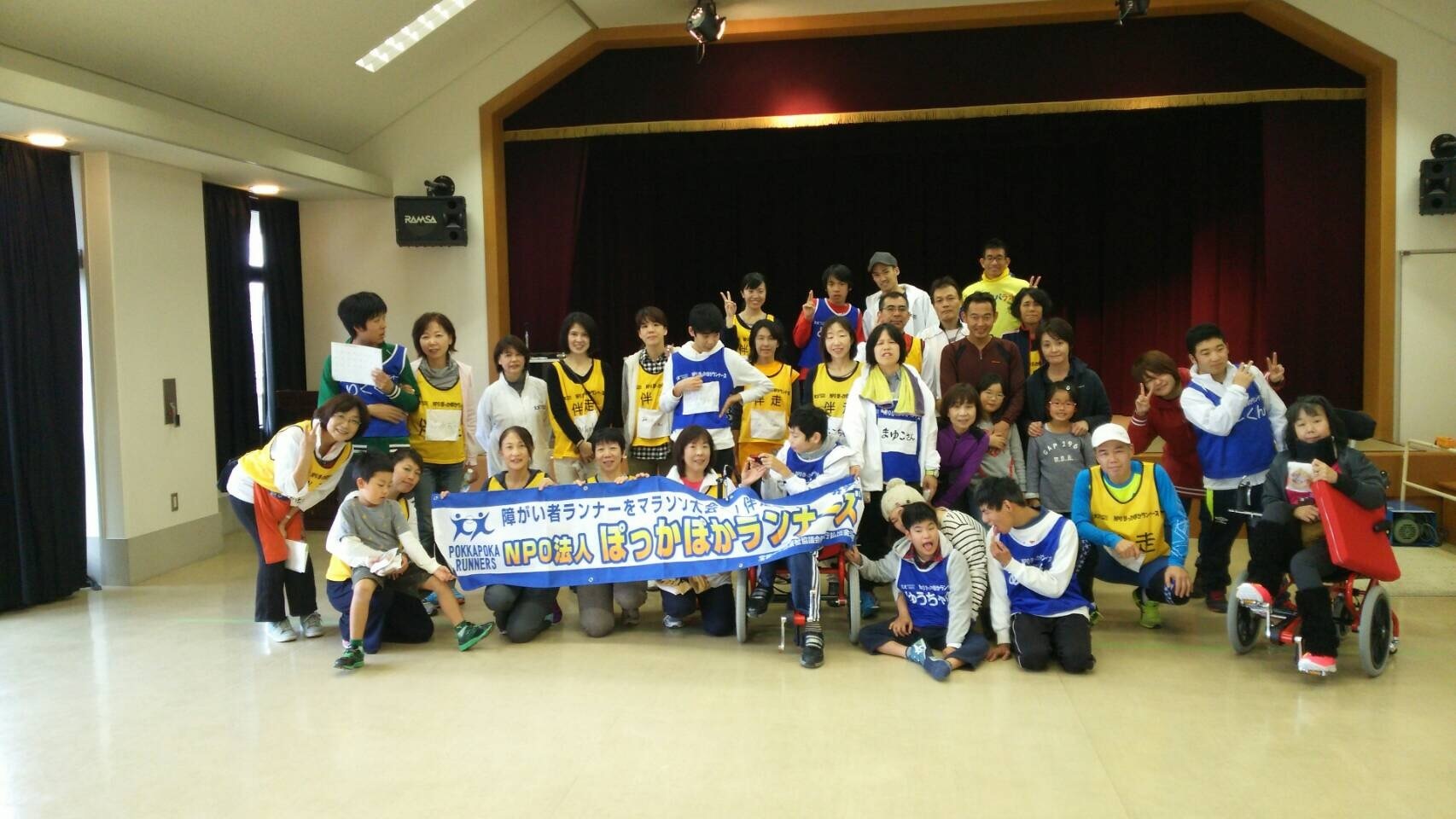 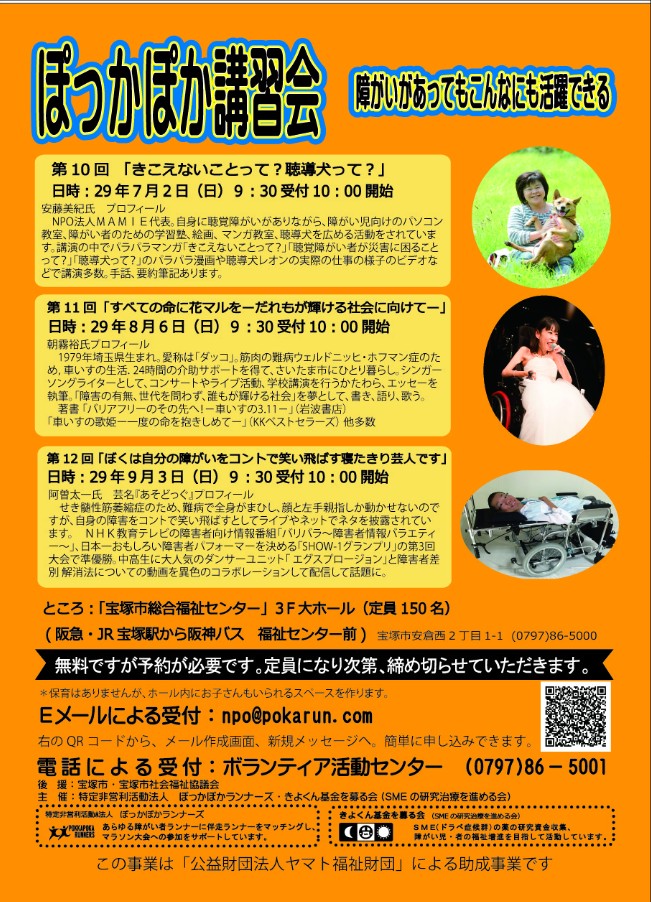 We have 9 training sessions annually, at Takarazuka(Hyogo Prefecture) and Osaka and we would welcome corporate volunteers . The type of disabilities vary – intellectual, physical and visual and we consult with the runners how to accompany with them. We would like our volunteers to understand and experience of joy of running together.

We would like to increase number of English articles on our website and welcome translation volunteers who can help.
フォームから送信された内容はマイページの「フォーム」ボタンから確認できます。